Development of the soccer domains:
Technical-tactical: Dribbling, controlling the ball and kicking.
Mental: Maintain focus.
Socio-psychological: n/a.
Physical: Perform rapid movements with and without the ball.

Organisation: We have five setups (or parts) as shown in the below diagram. In part one there are four poles positioned one yard apart and in a line. In part two there are two poles positioned one yard apart and a passing wall board set eight yards from these two poles. In part three we have a number of cones scattered and two gates made of markers. One is the entry gate while the other is the exit gate. In part four we have an agility ladder, while in part five we have two mannequins positioned at an angle from each other and five yards from the mini goal.

Description: The exercise is divided into five parts as described hereunder. These are stations which the player must complete in sequential order.

Part 1: Self-pass the ball, slalom around the poles to receive and control the ball.

Part 2: The player dribbles through the gate and passes against the wall board to receive and control the ball.

Part 4: Before performing quick footwork using the agility ladder, the player self-passes the ball and controls at the end.

Part 5: The player performs a feint at each mannequin prior to finish with a well-aimed pass on the mini goal.

Training load: Each player should perform the circuit between six to eight times with a one minute rest in between. The par-course should take between twenty and twenty five seconds to complete.

Periodization: This practice is ideal as a recovery session. The level of complexity, the intensity and also the duration is low. 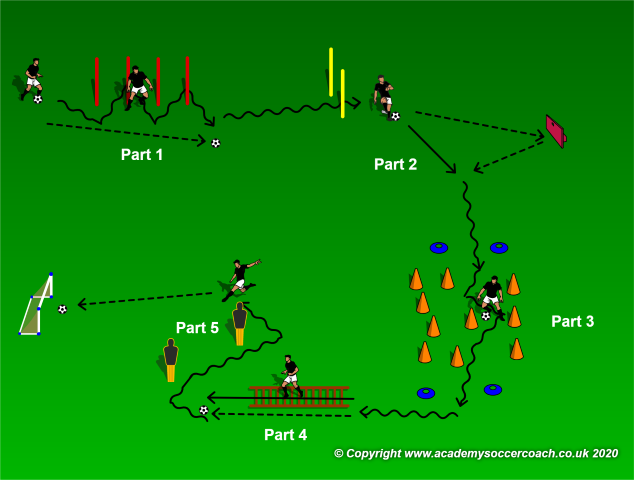 The initial set up of the par-course. Variations of the set up may be applied to introduce different movements.