Method of scoring points in this exercise requires constant support in front and in behind the ball. After single point is scored, the game continuous, with the same team having possession. 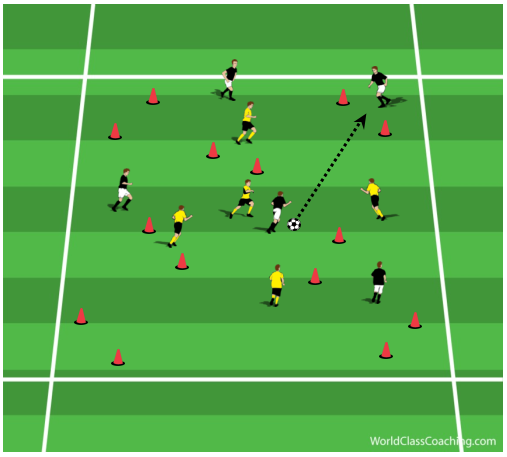 As a progression, two medium sized goals can be added on the opposite ends. When two points are scored, a team can try to score in a bigger goal what will give them two additional points. After each goal into the medium sized goal, defending team starts with the possession of the ball. 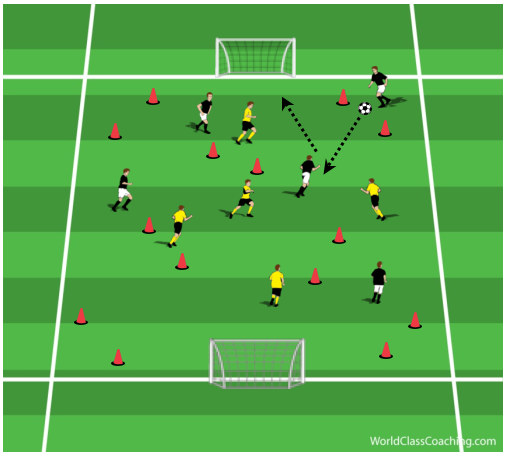 Instead of medium sized goals, four small goals can be placed on each end line. In this progression, when defending team gets the ball, they can score into one of the four small goals. That goal is worth two points. 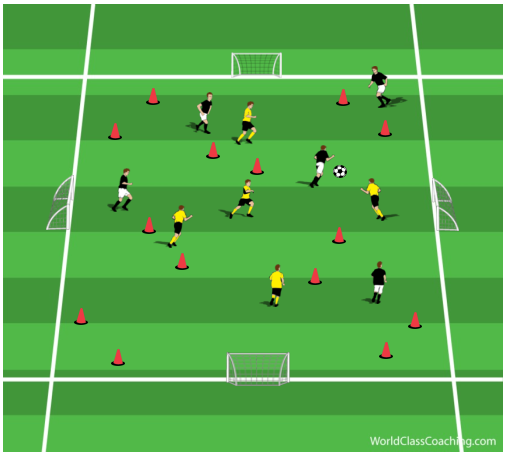 Timing:
Each single game should be played 1-3 minutes. That should be repeated 6-10 times in each of the two series. Rest between single games lasts 3-1 min., while rest between series lasts 4 min. That time can be for example used for low intensity, technical exercises.

Hi, How many touches (ball) per player?
Could we play in progression with 3 touches, 2 touches, 1 touche?
To make the game more difficult, after each point scored, the support player can make a long pass to the other side to make area changes!

Sorry for my English written.
Thanks in advance,

You can start with one ball and then add more if the players have difficulty scoring. Adding a restriction on touches would be a great progression.

Thanks for sharing your ideas.

I’ve played this game many times with my teams over the years. A key for less skilled teams is to add neutrals who are always on offense so that the offensive team can maintain possession long enough to score before being dispossessed.

Hi Alex, can you help me with some drills for a u6 team just learning the concepts of spacing and positioning themselves off the ball to recieve a pass while on attack or defense.

Hi’add ntural player of long lines for more load on defend team.
thanks.

great article will try it out.

Thanks great drill! I Will try iT this week on training with 2 bouncers(neutrals). The kids loose the ball to fast on 1vs1.

Great drill will try it out , but I suggest a bigger area that will lead to bigger spaces between the small goals , this will improve pass accuracy.