Technical: Attacking heading, aerial passing, dribbling, feints/fakes, and tackling.
Tactical: Defending 1v1.
Mental: Concentration, quick shift of focus (attacking in a 1v1 after heading the ball) and attitude to the positive or negative transition if the defender wins the ball in the 1v1.
Physical: Strength endurance for the lower body.

Organisation: The practice is specifically designed for forwards. We have a group of forwards in a line approximately 30 yards in front of the goal. Three hurdles (approximately 12 inches in height) are positioned in front of each other and a pole is positioned 8 yards to the both sides of the hurdles. Another hurdle is positioned 10 yards in front of the three hurdles. A goalkeeper is in goal, and we also have a pitch measuring 20 yards in length x 10 yards in width marked for the 1v1. Two mini goals are positioned on the goal line at one end while a gate is set for the counter attack (should the defender wins possession of the ball) at the opposite end.

Training load: 2 series of 6 repetitions each, with a rest of three minutes between series. The players should rest for one minute between repetitions. The work to rest ratio should be approximately from 1:4 to 1:5. The duration of each repetition should not be more than 20 seconds in total.

Periodization: This practice should be carried out on the strength day which should not be less than 72 hours following the previous match (MD+3) and at least 72 hours prior to the next one (MD-3). This applies for the players who have played for more than 60 minutes (depending on the intensity of the match) in the last match. The players who did not play or played just a small part, can perform this session even in the day following the match.

Training considerations: The players should be thoroughly warmed up before this practice with special attention given to dynamic flexibility and mobility of the lower limbs. 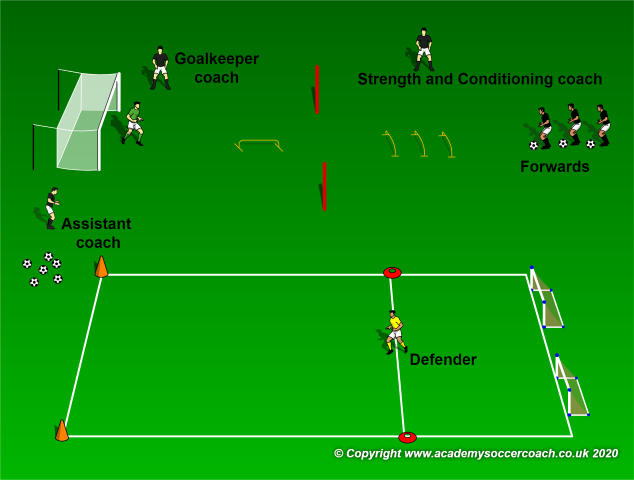 The setup of the exercise. In the 1v1 exercise the defender must start on the marked line. 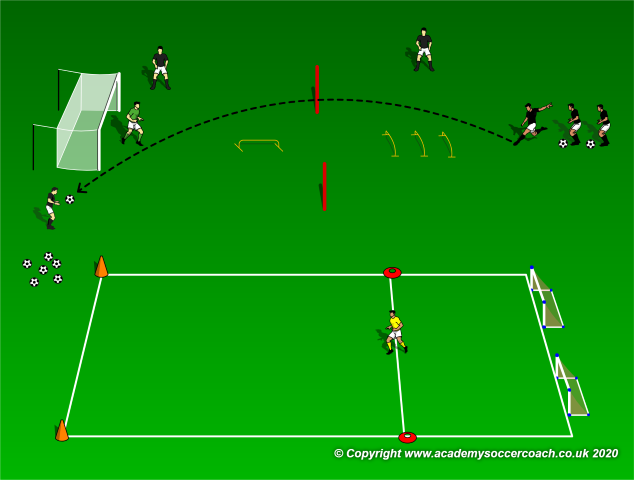 The forward plays a medium high pass to the assistant coach. 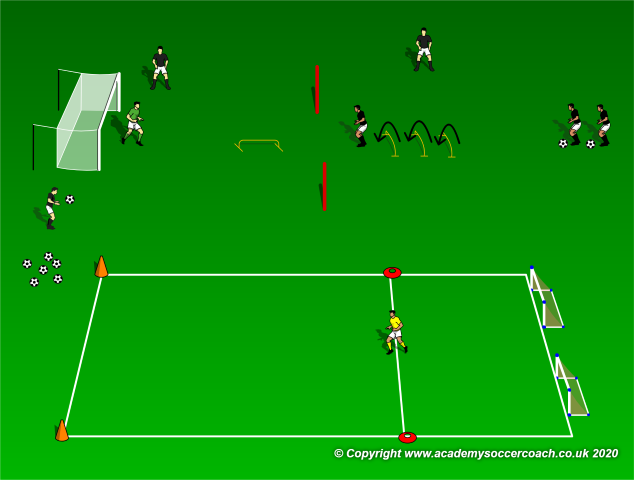 Following the pass, the forward performs three sequential high jumps over the hurdles. 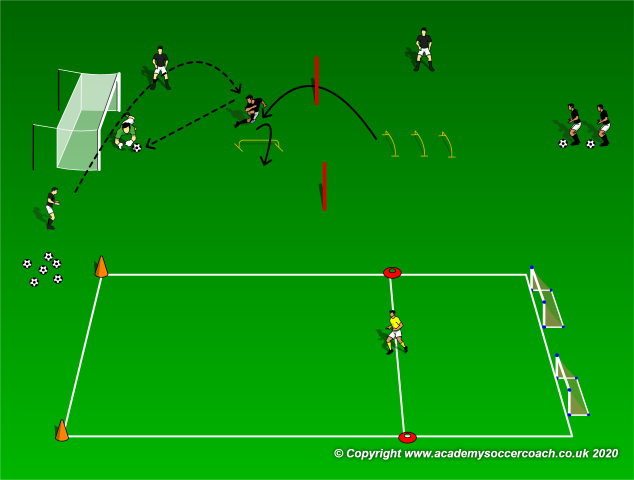 This is followed by running fast around the far pole and jumping over the hurdle (should be lower than the previous three hurdles) to finish the ball served by the coach with a header on goal. The coach serves from the right of the goal in the first series and then from the left in the second. 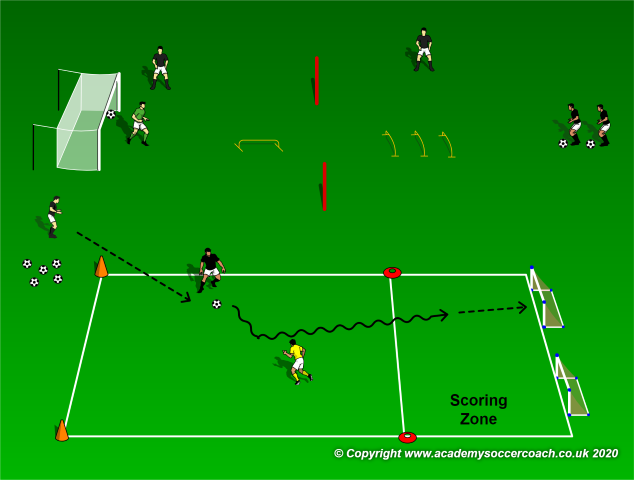 Immediately the forward receives the ball passed on the ground to play a 1v1 against the defender. The forward can only score from inside the marked scoring zone, while the defender scores (if he wins the ball) by dribbling between the two orange cones. The total duration of the exercise should not take more than 20 seconds, otherwise the exercise stops. Therefore, the offensive dribbling by the forward must be direct. When the attack is over the forward becomes a defender. After defending, the forward must again join the end of the line of forwards.

Variations:
1. Remove the 1v1.
2. Remove the single hurdle the forward jumps over to head the ball.
3. The pass from the forward to the assistant coach is played on the ground.
4. The forward concludes with a volley instead of a header.