Theme: Intermittent training.
Development of the soccer domains:
Technical: Receiving, passing and shooting at goal.
Tactical: Mobility, length and depth in attack.
Mental: Move quickly to provide a passing option after playing the ball.
Physical: Keep performing the quality of football actions for a prolonged period of time by delaying the onset of fatigue.
Organization: Area measuring 40 yards in length x 20 yards in width. Three groups of players at positions 5, 8 and 9 and two goalkeepers in goal.

Training load: 6 blocks of 3 minutes with a 1 minute of rest in between blocks (work to rest ratio 3:1).

Periodization: The exercise should be carried out on the endurance day which is at least 72 hours prior to a match and not less than 72 hours following the previous one.

Training considerations: Consider the total load of the session and adjust the training load accordingly. This practice should be performed after tactical training as the players are required to be physically and mentally fresh for tactical practices. Thus, making sure that they will be focused on the tactical details. 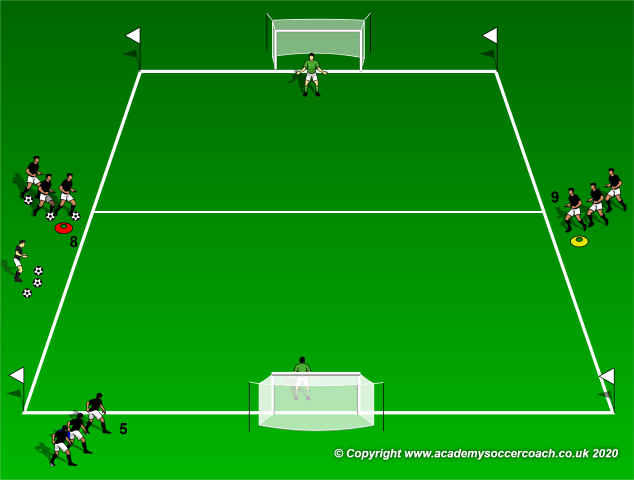 Player at position 8 starts with the ball. We can assimilate the positioning of the players to the positions they play in our system of play. 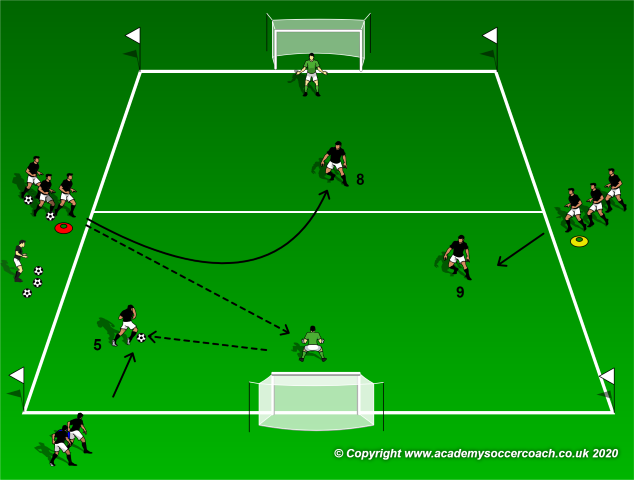 Player 8 passes the ball to the goalkeeper. Now, the three players must finish in the opposite goal in four or five passes maximum. The number of passes start being counted when the goalkeeper passes the first ball. The sequence of passes is for the players to decide. However, we give them these constraints. They must try to play with a maximum of two touch, they must move after passing the ball, they cannot be on the same vertical and horizontal lines and at the moment of shooting, they must all have crossed the midline. 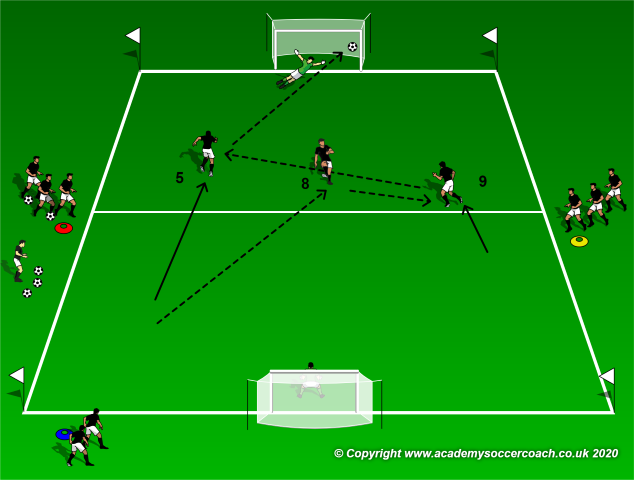 Encourage off-the-ball movement and passing speed. Afterwards, the players move to a new position anticlockwise. When the round is over, the goalkeepers switch goalposts so that now the one who was involved in the build-up will be stopping shots and vice versa.

Progression:
Have four groups of players. When the ball is played back to the goalkeeper, the four players should form a diamond shape. The goalkeeper then decides to whom to play the ball. As constraints include that all four players should touch the ball at least once, they should move after passing, they cannot be in the same horizontal and vertical lines, and they must conclude in the opposite goal in under 15 seconds. As in the previous exercise, all the attacking players must be in the opposite half of the field when the shot is taken. When the round is over, the goalkeepers switch goalposts so that now the one who was involved in the build-up will be stopping shots and vice versa.

As a further progression the coach calls out to whom the goalkeeper should pass the first ball. As an example the coach may shout “number 9” and the goalkeeper plays a direct ball to the number 9. 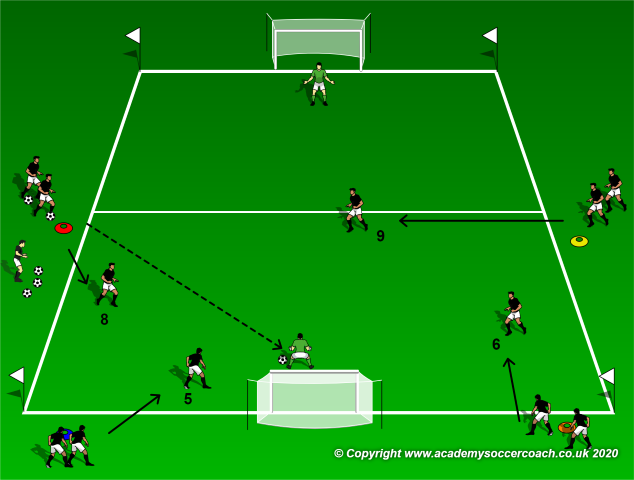 In this progression we have four groups. More options for the build-up and ball circulation exists. 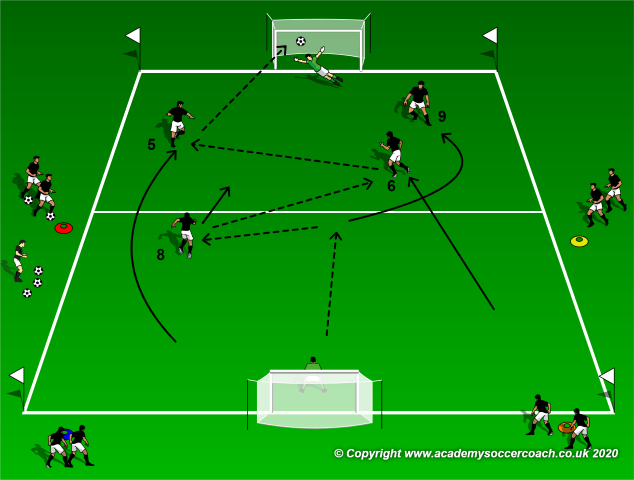 Encourage the players to perform off-the-ball movements after passing the ball such as overlaps and underlaps.