Technical: Medium range passing, oriented first touch, dribbling forward at speed, tackling, crossing (including cut back passes) and finishing.
Tactical: Attacking down the flanks and getting unmarked inside the penalty area.
Mental: Quick decision-making of how to create space, get unmarked and when to attack the space created.
Physical: Explosive movements with changes of direction to attack the ball.

Organisation: The practice takes place in one half of the pitch. We have a goalkeeper in goal, a full back on both sides and a central defender. The attacking team has a striker and a winger on both sides. Two mini goals are positioned 15 yards in front of the penalty area. If the defenders win the ball, they counter on the two mini goals.

Training load: 2 series of 6 to 8 repetitions each. Rest for one minute between repetitions and for four minutes between series. We aim for a work to rest ratio of approximately 1:10.

Periodization: The exercise should be carried out on the speed and power day, not less than 48 hours prior to the match (MD-2).

Training considerations: The players should be thoroughly warmed up before this practice with specific attention given to dynamic flexibility of the lower limbs.

The play always starts from the striker’s position (black 9) who passes to either side (winger 7 or winger 11) depending on which winger has to go next. 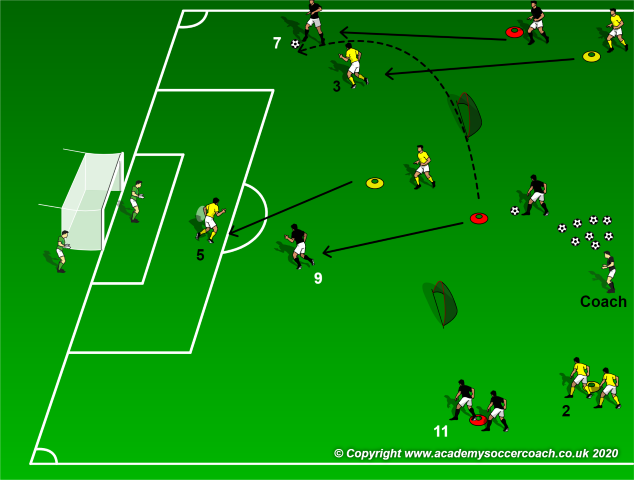 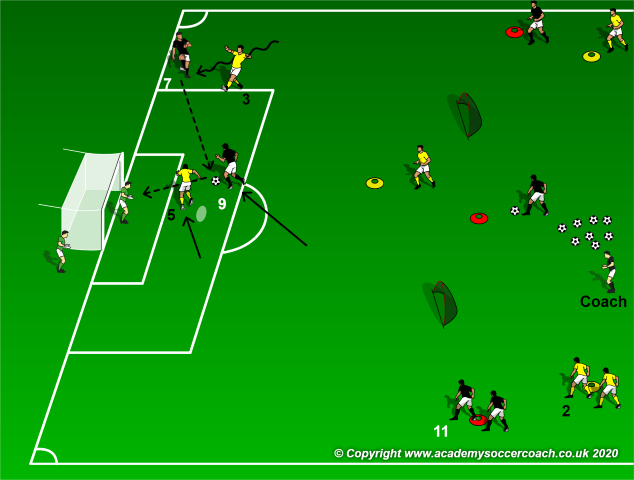 The winger plays the cross for the striker to finish on target. Should the defender or the goalkeeper win the ball, the defending team quickly counters on the two mini goals.